Difference between Rectangular Pipe, Square Pipe, and Round Pipe

The difference between a rectangular pipe, square pipe, and round pipe appears dominant in terms of calculating the shape, measurement, rigidity, and application.

One of the most frequent questions customers ask about is the difference between a rectangular pipe, square, and round pipe. However, the terms pipes and tubes are interchangeable in industrial as well as commercial circles. This is because we consider pipes normally as always round in shape. Whereas rectangular and square pipes and normally referred to as square and rectangular tubes.

You May Also Read: Advantages and Disadvantages of Galvanized Tube

Things, therefore, may look similar however, the shape, size, and function between the three are very different and noticeable. This is because the shape of the pipe largely affects the motion of the particle and fluid in it. Research shows that round pipes are more effective in spreading the asymmetric flow rate. 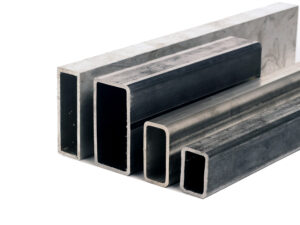 Difference between Rectangular, Square, and Round Pipe

A round pipe is different from a rectangular pipe and a square pipe. The difference is not only in terms of shapes but design and flow also. A round pipe is a hollow section comprising with round cross-section area. This thus helps fluid to flow conveniently through it. However, in designing and choosing the pipe, two important considerations must be kept in mind. The first is the outer diameter and the second is the thickness of the wall. The inside diameter of the round pipe is the outer diameter minus 2 times the wall thickness. This calculation is hence helpful in calculating the capacity of the fluid going through the pipe. The tolerance of the round pipe is generally loose but we set on a pre structure basis. Strength in a round pipe nonetheless is not a major perspective.

It is applicable in a variety of applications as petroleum, natural gas, steam, water, gas. The weight of the rectangular pipes becomes light when the bending and torsional strength are the same.

This thereby makes rectangular pipes famous for manufacturing mechanical parts and engineering designs. This also happens to be effective in producing conventional weapons, barrels, shells, and other parts.

The scope of coverage of a square pipe is very much different from that of a rectangular pipe. The perforation process is the famous method of producing the square pipe. However, the process causes many defects in the pipe.

Flow Rate Difference Between Rectangular, Square, and Round Pipe

Flow rate is the major difference between a rectangular pipe, square pipe, and a round pipe. The internal and external diameter and the thickness of the wall as well as help in measuring the rate of flow.

This is the reason that round pipe bears more symmetrical flow. However, in rectangular and square pipes, the flow rate is asymmetrical.

The pseudo-homogeneous flow rate occurs in the case of a round pipe. This, hence, happens when the flow velocity of the fluid passing increases.

Due to the round hollow structure of the inside of the round pipe, the majority of the particles move in a streamline. The reason for the streamlined movement thereby is all the solid particles moving towards the center of the pipe.

Most of the solid particles in rectangular pipe flow also towards the center of the pipe.  This happens because at the center the turbulent energy remains low.

The particles therefore by nature moves towards the area of low turbulent energy. A rectangle having four sides means four apexes where the possibility of solid particles is less. This hence indicates that little remains the chance for direct interference between the solid particles.

This is the reason that the pipe wall eventually becomes less thick. This thus results in the pressure drop in a rectangular pipe. All this process allows the liquid to heat a bit. As it happens, consequently, the temperature difference occurs and heated flow flows towards the center.

Main Differences between Round, Rectangular, and Square Pipe

This is because the wall thickness is an essential component for both square and rectangular pipes. However, in a square pipe, only an inside diameter is of prime importance.

Amongst the round, square, and rectangular pipe, wall thickness matters a lot. These are the most prominent factors that distinguish the three types of pipes.

We measure the thin thickness of both a square and a rectangular pipe using a gauge. Nonetheless, for thickness to be thick, we measure it in fractions; in inch or millimeter. On the other hand, in the case of a round pipe, we call the wall thickness as schedule thickness. It helps in measuring the thickness of the round pipe.

The most common schedules are SCH20, SCH40, and SCH80. SCH40 is the most commonly appreciated thickness model, whilst that of SCH80 is thickest and the heaviest of them all.

The structure is the most prominent factor that distinguishes three pipes from one another. For square and rectangular pipes, the structures are rectangle and square. It cannot in any way be round.

This is the reason that both are hence seam-welded structures. Round pipe, nevertheless, is always round in shapes and therefore is more rigid than the two. Round pipe thereby is seamless and pressure rated. This property thus helps in avoiding the leakage of any kind of liquid. This is because around pipe usually carries inflammable liquid or gases.

If we compare the tolerance of pipes, the round pipe bears less tolerance in comparison with a square and rectangular pipe. Pipes are normally an asset in industries for carrying, transporting, and distributing material from one place to another.

This thereby increases the relative importance of certain factors like pressure, straightness, or roundness to a strict and specified degree.

You May Also Read: A Complete Introduction to Steel Hollow Section

The terms pipes and tubes are interchange terms. However, the key differences between different shapes as rectangular, square, and round are prominent and of prime importance. What matters most in each case is the way the shape carries design, order, and tolerance for a specific use. 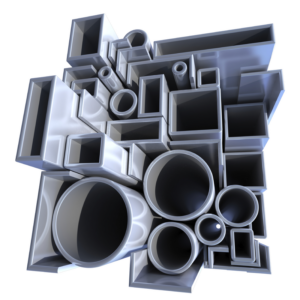 Next: A Comprehensive Introduction to HOT DIPPED GALVANIZED Tube